How to Survive in South Central lyrics - Ice Cube

How to Survive in South Central Song Lyrics

"And now, the wonderous world of.."
"Hey, come to Los Angeles!
You and your family can have peace and tranquility.
Enjoy the refinement.."
"Hey Bone, hey nigga where you at though?"
"Hello, my name is Elaine --
and I'll be your tour guide through South Central Los Angeles"
[Ice Cube]
How to survive in South Central (what you do?)
A place where bustin a cap is fundamental
No, you can't find the sh*t in a handbook
Take a close look, at a rap crook
Rule number one: get yourself a gun
A nine in your ass'll be fine
Keep it in your glove comparment
cause jackers (yo) they love to start sh*t
Now if you're white you can trust the police
but if you're black they ain't nothin but beasts
Watch out for the kill
Don't make a false move and keep your hands on the steering wheel
and don't get smart
Answer all questions, and that's your first lesson
on stayin alive
In South Central, yeah, that's how you survive
"Hi this is Elaine again.
Are you enjoying your stay in South Central Los Angeles,
or is somebody taking your things? Have you witneesed a driveby?
Okay, make sure you have your camcorder ready
to witness the extracurricular activities on blacks by the police,
so you and your family can enjoy this tape, over and over again."
"This is Los Angeles."
"This is Los Angeles."
[Ice Cube]
Rule number two: don't trust nobody
especially a b**ch, with a hooker's body
cause it ain't nuttin but a trap
And females'll get jacked and kidnapped
You'll wind up dead
Just to be safe don't wear no blue or red
cause most niggaz get got
in either L.A., Compton or Watts
p**sed-off black human beings
So I think you better skip the sight-seeing
And if you're nuttin but a mark
make sure that you're in before dark
But if you need some affection mate
Make sure the b**ch ain't a section eight
cause if so that's a monkey-wrench hoe
and you won't survive in South Central
"Now you realize it's not all that it's cracked up to be.
You realize that it's f**ked up!
It ain't nothin like the sh*t you saw on TV.
Palm trees and blonde b**ches?
I'd advise to you to pack your sh*t and get the f**k on;
punk motherf**ker!"
And you need your ass straight smoked
Yo I wanna say whassup to DJ Chilly Chill
Sir Jinx, aiyyo Cube these motherf**kers don't know what time it is
So show these motherf**kers what's happenin
Tell these motherf**kers, don't f**k around in South Central
God damnit!
[Ice Cube]
Rule number three: don't get caught up
Cause niggaz are doing anything that's thought up
And they got a vice
on everything from dope, to stolen merchandise
We discern
cause South Central L.A., is one big yearn
Waitin for a brother like you to catch a disease
and start slangin ki's
to an undercover or the wrong brother
And they'll smother, a out of town motherf**ker
So don't take your life for granted
cause it's the craziest place on the planet
In L.A. heroes don't fly through the sky of stars
they live behind bars
So everybody's doin a little dirt
And it's the youngsters puttin in the most work
So be alert and stay calm
as you enter, the concrete Vietnam
You say, the strong survive
sh*t, the strong even die, in South Central
Yeah you b**ches, you think I forgot about your ass,
you tramp-ass hoes? You better watch out.
And for you so called baller-ass niggaz,
you know what time it is. South Central ain't no joke.
Got to keep your gat at all times motherf**kers.
Better keep one in the chamber and nine in the clip god damnit.
You'll sho' get got, just like that.
This ain't no joke motherf**kers.
Now I wanna send a shout-out to E-Dog, the engineer,
puttin his two cents in..
"This is Los Angeles." 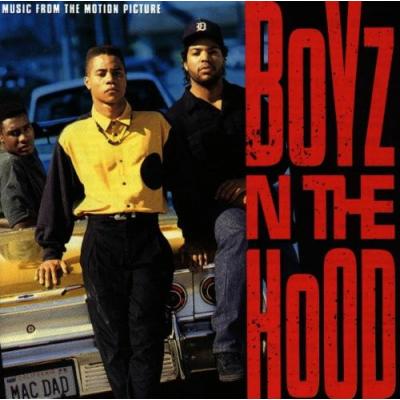 Growin Up in the Hood Me and You Every Single Weekend It's Your Life Just a Friendly Game of Baseball Too Young MORE ›
New soundtracks
Glass Onion: A Knives Out Mystery Bones and All The Guardians of the Galaxy Holiday Special Wendell & Wild Weird: The Al Yankovic Story School for Good and Evil Spider-Man: Across the Spider-Verse Amsterdam Lyle, Lyle, Crocodile Luckiest Girl Alive Monster High: The Movie Bros Hocus Pocus 2 Greatest Beer Run Ever My Best Friend's Exorcism Lou End of the Road MORE ›