The Heat Is On In Saigon lyrics

The Heat Is On In Saigon Song Lyrics

["Dreamland" is a club filled with American Marines,]
[civilians and south Vietnamese officers. The girls parade]
[around and get the crowd to buy raffle tickets:]
[the winner of the "beauty contest" will be the prize.]
[AMERICANS]
The heat is on in Saigon
The girls are hotter 'n' hell
One of these slits here will be Miss Saigon
God, the tension is high, not to mention the smell
The heat is on in Saigon
Is there a war going on?
Don't ask, I ain't gonna tell
[Two friends, CHRIS and JOHN, are among the Marines. JOHN is with one of the girls]
[ENGINEER]
Ah, Monsieur Chris! Monsieur John!
You've come to win Miss Saigon
[JOHN]
I gotta get my friend laid as a last souvenir
[CHRIS]
I love you, pal, but your bullsh*t
I've had up to here
[ENGINEER, CHRIS AND JOHN]
The heat is on in Saigon
[JOHN]
But 'til they tell us we're gone
I'm gonna buy you a girl
[CHRIS]
You can buy me a beer
[The girls leave the men and move onto the stage]
[MIMI]
See my bikini, it's just the right size
[YVETTE]
Don't you enjoy how it rides up my thighs?
Look from behind, it'll knock out your eyes
[YVONNE]
I'll show you: my special trophy of war
[MIMI]
For a Marine, I'll show more
[AMERICANS]
You won't get up off the floor
The heat is on in Saigon
Don't tell me I'm reassigned, all that chickensh*t sucks
Tonight I'm out of my mind, not to mention ten bucks
[GIGI]
If I'm your pin-up, I'll melt all your brass
Stuck on your wall, with a pin in my ass
If you get me, you will travel first class
I'll show you, we will make magic, cheri
[ENGINEER]
You buy more tickets from me
The winner gets her for free
[CHRIS]
The meat is cheap in Saigon
I used to love getting stoned, waking up with some whore
I don't know why I went dead, it's not fun anymore
[KIM]
I'm seventeen, and I'm new here today
The village I come from seems so far away
All of the girls know much more what to say
But I know
I have a heart like the sea
A million dreams are in me
[CHRIS]
Good Jesus, John, who is she?
[AMERICANS (AND CROWD)]
The Cong is tight'ning the noose
Is it a week or a day or an hour that we got?
Tonight could be our last shot got to put it to use
[The GIRLS come off the stage and mingle with the men.]
[ALL, INCLUDING GIRLS]
Tonight I bet that you and I will get along
Forget about the threat, forget the Viet-Cong
[ALL MEN]
Mimi, Gigi, Yvette or Yvonne
Gonna buy me a beer, and elect Miss Saigon
[The ENGINEER holds the election by holding his hand over]
[each girl's head for applause. When KIM is judged, CHRIS]
[claps loudly, which makes her notice him.]
[ENGINEER]
Yvonne, Yvette, Mimi, Kim, Gigi
[GIGI wins]
[ENGINEER]
Attention, s'il vous plait!
By popular demand
Miss Gigi Van Tranh
Is elected Miss Saigon!
[The ENGINEER puts a cheap tiara on GIGI and a ribbon which says "Miss Saigon".]
[AMERICANS]
The heat is on in Saigon
And things are not going well
But still at midnight, the party goes on
A good-bye party in hell
[ENGINEER]
And now who wins this pussycat?
[The ENGINEER holds a bowl; GIGI picks up a ticket.]
[GIGI]
Number 66!
[It is one of the Marines. He cheers with his friends. The scene freezes.] 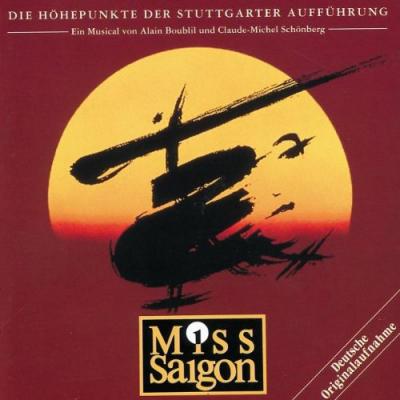 I'd Give My Life For You The Movie In My Mind I Still Believe The Last Night Of The World Sun And Moon Why God Why? Bui-Doi This Is The Hour Now That I've Seen Her Please MORE ›
New soundtracks
Army of the Dead Cruella The Mitchells vs. The Machine Thunder Force SpongeBob Movie: Sponge on the Run Dutch Raya and the Last Dragon Yes Day Coming 2 America Billie Eilish: The World's A Little Blurry Walker Stage Mother Boogie WandaVision To All the Boys: Always and Forever, Lara Jean Cherry United States vs. Billie Holiday MORE ›