What's playing at the Roxy?
I'll tell you what's playing at the Roxy.
A picture about a Minnesota man falls in love with a Mississippi girl
That he sacrifices everything and moves all the way to Biloxi.
That's what's playing at the Roxy.
What's in the daily news?
I'll tell you what's in the daily news.
Story about a man bought his wife a small ruby
With what otherwise would have been his union dues.
That's what's in the daily news.
What's happening all over?
I'll tell you what's happening all over.
Guy sitting home by a television set
That used to be something of a rover.
That's what's happening all over.
Love is the thing that has nipped them.
And it looks like Nathan's just another victim.
NICELY (spoken) Yes, sir!
When you see a guy reach for stars in the sky
You can bet that he's doing it for some doll.
When you spot a John waiting out in the rain
Chances are he's insane as only a John can be for a Jane.
When you meet a gent paying all kinds of rent
For a flat that could flatten the Taj Mahal.
Call it sad, call it funny.
But it's better than even money
That the guy's only doing it for some doll.
When you see a Joe saving have of his dough
You can bet there'll be mink in it for some doll.
When a bum buys wine like a bum can't afford
It's a cinch that the bum is under the thumb of some little broad.
When you meet a mug lately out of the jug
And he's still lifting platinum folderol
Call it hell, call it heaven
But it's probable twelve to seven
That the guy's only doing it for some doll.
(interlude)
When you see a sport and his cash has run short
Make a bet that he's banking it with some doll.
When a guy wears tails with the front gleaming white
Who the hell do you think he's tickling pink on Saturday night?
When a lazy slob takes a goody steady job,
And he smells from vitalis and barbasol.
Call it dumb, call it clever
Ah, but you can get odds forever
That the guy's only doing it for some doll
Some doll, some doll
The guy's only doing it for some doll! 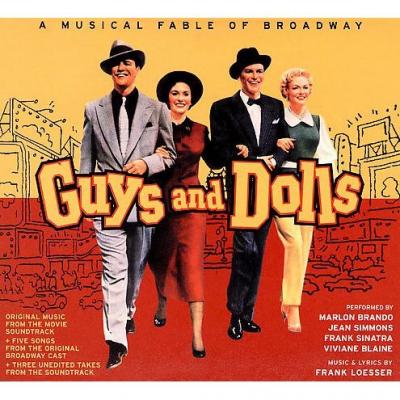