MEG:
Now if ye think this weddin' day went jus' a wee amiss,
Then I will tell ye 'bout a weddin' far more daft than this.
The lad involved turned out to be no other but my pa,
An' by the strangest bit o' luck, the woman was my ma.
MacGregor, MacKenna, MacGowan, MacGraw, MacVitie, MacNeil an' MacRae;
Ay, all the folk in the village were there at my mother's weddin' day.
For pa had asked his friend MacPhee, an' Mac had come with May MacGee,
An' May invited ninety-three to my mother's weddin' day.
Then up the road came Ed macKeen with half the town of Aberdeen.
CHORUS:
Ay, ev'ryone was on the scene at her mother's weddin' day.
MEG:
At quarter to five everybody was there a-waitin' around in the room,
MacVicker, MacDougall, MacDuff an' MacCoy--everybody but the groom.
An' as the hours turtled by, the men got feelin' kind o' dry,
An' thought they'd take a nip of rye while a-waitin' for the groom.
An' while the men were dippin' in, the ladies started on the gin.
CHORUS:
An' soon the room began to spin at her mother's weddin' day.
MEG:
Then all of a sudden the liquor was gone, the gin an' the whiskey an' all.
An' all of a sudden the weddin' affair had become a bonnie brawl.
For Pete MacGraw and Joe MacPhee began to fight for May MacGee,
While May MacGee an' Sam MacKee were a-wooin' in the hall.
So cold an' stiff was John MacVay, they used him for a servin' tray.
CHORUS:
For ev'ryone was blithe and gay at her mother's weddin' day.
MEG:
MacDuff an' MacVitie were playin' a game, an' usin' MacCoy for the ball.
MacKenna was eatin' the bridal bouquet, an' MacNeil hung on the wall.
When finally my father came, his eyes were red, his nose aflame.
He dinna even know his name; he was drunkest of them all.
The people were lyin' all over the room a'lookin' as if they were dead,
Then mother uncovered the minister quick, an' she told 'im: Go ahead.
Then pa kneeled down on Bill MacRae, an' mother kneeled on Jock MacKay,
The preacher stood on John MacVay, and that's how my ma was wed.
It was a sight beyond compare. I ought to know, for I was there.
CHORUS:
There never was a day as rare as her mother's weddin' day! 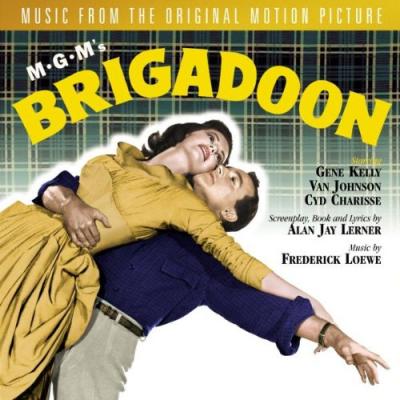 The Heather On the Hill Waitin' For My Dearie Come To Me, Bend To Me The Love of My Life I'll Go Home With Bonnie Jean Brigadoon There But For You Go I Vendors' Calls and Down on MacConnachy Square Once in the Highlands The Chase From This Day On MORE ›
New soundtracks
Bros Hocus Pocus 2 Greatest Beer Run Ever My Best Friend's Exorcism Lou End of the Road Bodies Bodies Bodies Day Shift Bullet Train Vengeance DC League of Super-Pets Minions: The Rise of Gru Elvis Good Luck to You, Leo Grande Brian and Charles Jerry & Marge Go Large Lightyear MORE ›