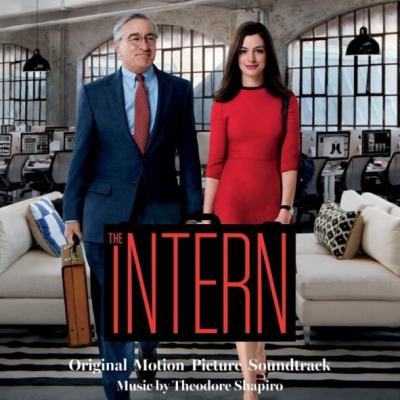 ›I Spy Something Green

›The Girl From Ipanema

›You Were Meant For Me

Presence of two experienced actors – Anne Hathaway and Robert De Niro, both of which received Oscar, makes this unique film simply brilliant. In the motion picture, there are number of good humor and the acting with brilliant emotions of the main characters that show such subtle nuances that are difficult to imagine them more from someone. Especially Robert so incredible plays his feelings, so you quite clearly understand why he was given the most prestigious Academy award.

In the film, the hero of Robert says that he was over 70 years old. And in the collection there are same time-tested things that aged, probably, not less than the mentioned above. Half of the collection was written by, of course, not so old, but nevertheless, a brilliant composer Theodore Shapiro. It is a pity that almost all of his music from this collection is simply not available in the Internet at the moment, so that they cannot be heard directly anywhere except as in the film.

Ray Charles  really pleases us, it is a pity that only with one melody. Well, his fans can find the required number of songs in the free or try-and-buy access to sweeten their auditory nerves.

These Foolish Things – a song from the past, when Hollywood was more beautiful, all the men wore suits, were very elegant and styled their hair with grease. The women wore dresses and hairstyles in the style of luxurious Marylyn Monroe.


The collection, in fact, consists of three major parts – beautifully performed music by Theodore Shapiro; oldest and most well-known songs and new contemporary (e.g., Ways to Go or Strange Talk). Predominate in this collection are by the first and second parts and the third is almost nothing – three songs and they are the music from the movie trailer, apparently not to parade all the amazing quality right away, that it is in the collection, which is same good as well-aged wine.